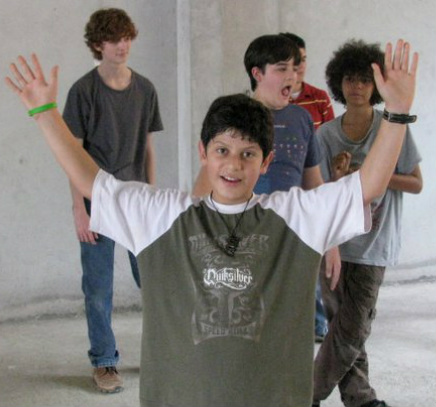 This season’s Cast Spotlight Interview is with a 12-year-old member of the Select Chorus. J.P. Salazar is just as eager to help with production-related tasks, such as finding costumes and bringing in materials to help construct puppets, as he is to learn new dance steps.

How did you first find out about FCCMT, and why did you want to be involved in this year’s production?
Luis Darío told me about [FCCMT].  I was in a play called “Un Lote de Yuca” with Darío, and I wanted to keep going in theater after that because I had such a good time with the singing and acting.

Who is your biggest inspiration?
Well, my teacher Jesse, who directed “Un Lote de Yuca” has been a big inspiration. And also Luís Darío, because I was in a music program with him and he really encouraged me to act and sing and be part of Far Corners. I admire his talent and he makes me want to do more theater.

What do you like about FCCMT?
The schedule is very busy, which is hard sometimes, but I know that if I wasn’t here I would just be sitting at home alone all day doing nothing. I like having something to keep me occupied so that I don’t spend the summer alone and bored and dying inside.

Are you interested in being involved with FCCMT in the future?
Yes, definitely! And after this I would like to keep going with theater all the way to Broadway. Even before I knew about theater I dreamed of going to Manhattan, and now I know what I want to do there!

﻿ What are your other hobbies besides theater? ﻿
I really like music. I have played guitar for a year and a half, piano for half a year, and flute since fourth grade. I never practiced it that much, so I’m not very good, but I still have a lot of fun with it.