A Board Member's Perspective
Patti's Trip to Costa Rica

Jim, Erin and Patti Lafferty in Costa Rica
I traveled for the first time to Monteverde with my husband Jim and Lisa Blackwell, whose son Zeke was this year’s Theater Director.  Having heard from Erin over the past few years about the experience of traveling to this beautiful place, I was prepared for the long and bumpy journey, but I didn’t fully appreciate Monteverde’s beauty until I arrived.

We experienced our first, and only, torrential rainfall while walking from the hotel to the theater venue, but upon our arrival we were surrounded and welcomed by the children of Monteverde and by the interns who were diligently working on finalizing things for opening night.  The smiles on their faces were all we needed to see to know that they were doing something they loved.

As a parent, and as a director of FCCMT, I was amazed at the set they were able to create from a small budget. They relied on the generosity of the town, borrowing power tools and other items too expensive to purchase, and ingeniously used the natural resources surrounding them, creating a beautiful tree that was to be the focal point of the show. 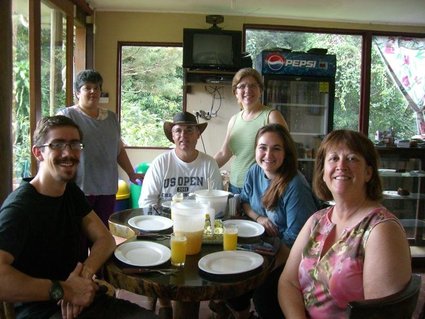 The Laffertys and Blackwells with Zeke's host family
Each time we introduced ourselves to locals and mentioned our connection to FCCMT, we heard how they look forward to the staff’s arrival and anticipate the show each year.  Walking through the town, we noticed several times that local businesses not only had posters from this year’s show prominently displayed, but also had more permanent “proud supporters of FCCMT” written on menus.

Erin’s and Zeke’s host families welcomed us into their homes for meals, and we heard how our children had become part of their families and how FCCMT has also enriched the lives of the community.  We participated in a meeting at the Friends’ School, talking to parents who expressed their support of our organization, and we were again reminded of the positive impact FCCMT is having on the young residents of this community.  Parental support was evident everywhere: not only from the large numbers in the audience each night, but also through the bake sale they organized to raise funds.  Most impressive to me was the number of adults who stayed behind to participate in the “talk-back” after each show.  This open forum allowed interns, cast members, and adults to openly communicate about how the themes of the show affect their day-to-day lives.

I left Monteverde feeling both fulfilled and grateful that we were able to be a part of this experience.